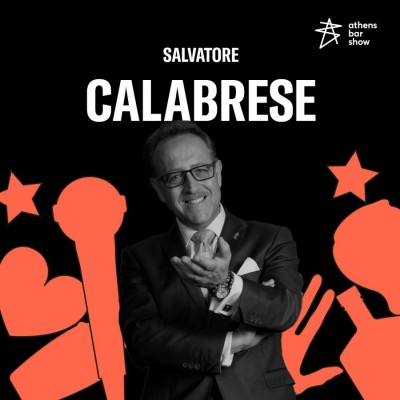 Salvatore Calabrese is one of the world’s most respected bartenders. His career spans more than 40 years in the hospitality business, beginning in Maiori on Italy’s Amalfi Coast.

In 1980 he moved to London and the bar at Duke’s Hotel. While at the Duke’s he developed a reputation for his Martini Cocktail and a niche market for extra-special cognacs. This was the start of a concept he calls Liquid History, a marketing concept that gained him respect with his peers.

He opened Mixology101 in Los Angeles in 2013 followed by ‘Bound by Salvatore’ in 2014 at The Cromwell Hotel in Las Vegas which` has since won ‘Best Cocktail Menu’ in the USA.

In April 2015 he launched his first venture in Asia, ‘Salvatore at Maison Eight’ Hong Kong

Salvatore Calabrese is a Past President of the United Kingdom Bartenders’ Guild. Today, Calabrese is active within the Industry Internationally, encouraging bartenders to become more professional through training programs, while also judging national and international bartenders’ competitions.

He has received an impressive array of awards both here and around the world, including ‘Industry legend’, ‘Professional Excellence Award’ and both ‘Outstanding Achievement’ and ‘Lifetime Achievement’ Awards as well as many awards for the various bars under his command.

He was most proud to be recognized by his countrymen with 'Salernitani Illustri nel Mondo’ in praise of his achievements and promotion of his country around the world and lately the recognition of his craft with the Maestro d’Arte e Mestiere.

In October 2012 he broke the Guinness World Record for the World’s Most Expensive Cocktail with ‘Salvatore’s Legacy’ valued at £5500.

In April 2015 at ‘Bound by Salvatore’, Cromwell Hotel, Las Vegas he made the World’s Oldest Martini

In June 2015 he made the World’s Oldest Negroni a the Camparino Bar Milan, to celebrate their centenary.

He was even approached to appear in the remake of Casino Royale to make the famous martini ‘shaken not stirred’ but he declined as he would never shake his Martini!

Salvatore was thrilled when challenged to perform his skills with the shaker whilst being driven at high speed on the racing circuit by Michael Schumacher, 7 times Formula 1 World Champion, and filmed for publicity as part of a Drink Awareness Campaign by Bacardi.

Salvatore has also been asked to contribute his skills to raise money at various celebrity fund raising events. He had the pleasure of working with David Furnish for the Elton John Aids foundation on the first of their Annual ‘Character Cocktails’ events and also with Jamie Oliver, Kevin Spacey and many others.